skip to main | skip to sidebar

Features and some Options

Made of Halftanned leather with a shaped Kydex liner.
Made to house a user knife, and suited for a wilderness environment, in a variety of weather types.

This is the evolution of the Ratweiler pattern wrapped around a fantastic knife forged by Dutch Bladesmith Toni Oostendorp (eastvillage knives), called the Krebbekx, by it's co-designer and owner. 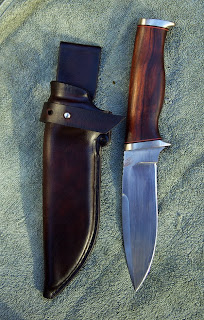 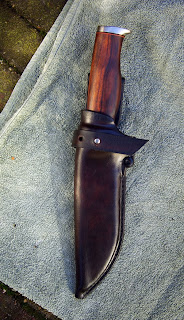 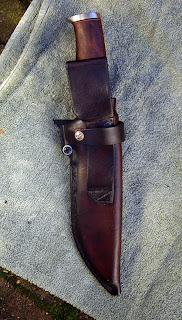 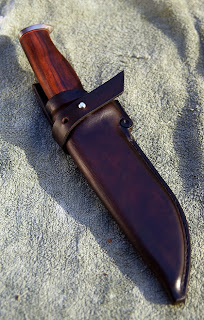 Opening
The opening of the sheath is wide and funnel-like, making sheathing the knife real easy.
A lot of sheaths have a small slit that easily gets cut when the knife gets sheated the wrong way, or have on opening that will easy catch the edge or the tip of the knife. This could easily happen when you´re cold and tired, under low visibility etc.. 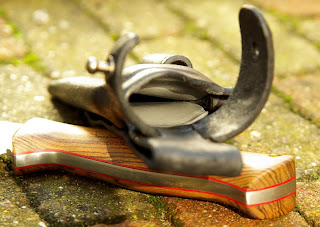 The part above the spine of the knife is shaped to provide a comfortable thumb-push to aid in controlled and silent drawing of the knife. 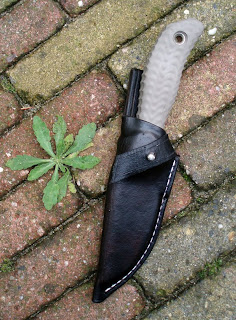 CupThe cup is the actual funnel that guides the tip of the knife in the right direction. It’s also the part that provides the main retention.
The sides are sloping down smoothly and have the corners not too sharp to prevent it from catching the blade tip.
The cup is also what prevents the opening of the sheath from being cut, when the knife is accidently sheathed the wrong way. 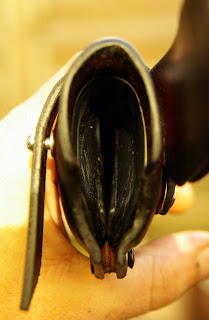 ShaftI prefer the fold-over type, as it leaves a strong and stiff spine, and the stitching will be on one side only.
It could be fitted more tight, for a more or less ‘sucking’ kind of retention, or could be left more loose, to minimize the chances for scratches and to make ´dropping´ the knife in more easy. 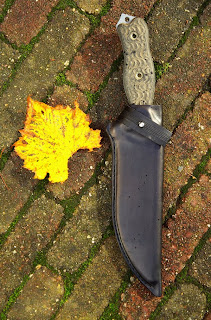 Stitching
The stitching is done by hand using the saddlestitch method. The holes are also all punched by hand. I try to keep the holes as small as possible to make the waxed thread lock tighter, and to prevent dirt and moisture to enter. Drilling the holes will almost certainly make the holes much bigger. I believe it´s more important that the holes are small and the lock is tight, then a 100% straight stiching on the back of the sheath.

The thread is sunken into the leather everywhere to reduce the chances of abrasion.

The stiches on the beltloop are always covered by the liner on the inside, so the knife will never be able to touch thread anywhere inside the sheath. 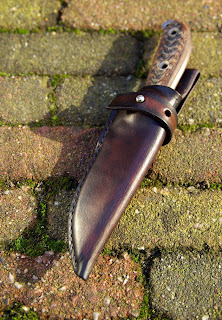 Retention
Depends on the tightness of the cup, and/or the tighness of the shaft.
(When doing double leather, the weld plays a very important role too)

The retention (without strap) should imo hold the knive in place while climbing trees and jumping streams, but should also make onehanded draw easy.

With a more sucking retention the action is smoother and more silent. The stiffnes of the beltloop is more important here. You´ll need to push the knife all the way down. 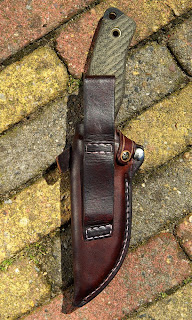 RetentionstrapWhen a strap is prefered it´s possible to fold it out of the way before resheating the knife. Lots of straps end up cut too many times, and this makes that impossible.
If the shape of the knife forces to make a strap round the handle, it´s easily replaceable by the user once it does get’s cut. I use heavy halftanned only for this kind of strap. 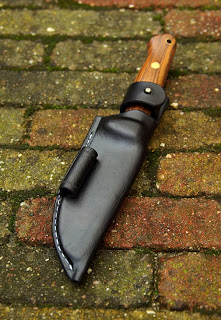 SurfaceThe surface of the leather is as untouched as possible. Carvings or stampings will weaken the surface structure of the skin, and therefore make it more vulnerable for deep scratches. 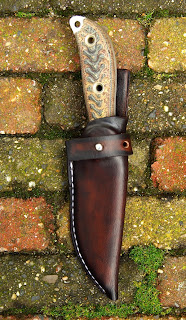 EdgeThe edge is glued before stitching for the obvious reasons. It´s polished to make it hard and to give dirt and moisture less chance to enter. 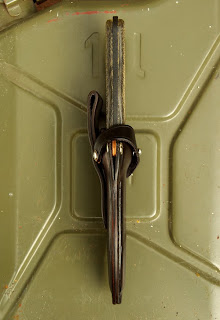 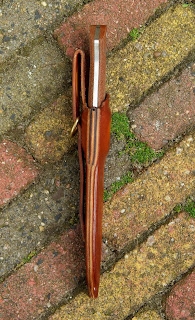 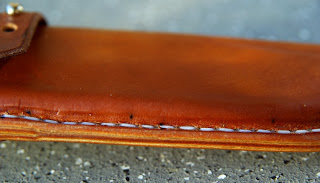 Buttons or Studs
I use stainless steel screw type of studs, and superglue them shut forever or use the blue loktite for those that are adjustable.
I prefer Gunrivets or Sam Brown posts over click buttons.
Once click buttons get clogged up or deformed a bit, they become useless, and they are a bitch to replace by simple means.

Drainage HoleMakes it possible to rinse the sheath under water, or blow dirt out. 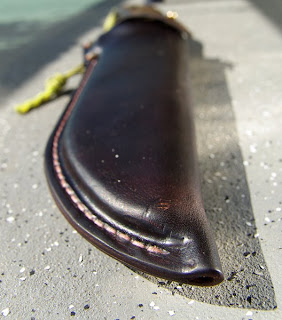 Finish
I work with Fiebings Professional Oil Dye only.
I prefer snoseal for impregnation. It gives a deep protection, basically waterproofing the sheath for 95% during actual use, and makes maintainance real easy. Apply it under carefull applied heat to let the leather really suck it in. Scratches virtually disappear when treated with snoseal.
Very important thing is the fact that snoseal doesn’t eat-up the glue and/or the stitching (waxed synthetic Tiger Thread).


Thread
I prefer the combination of Fiebings, Snoseal, and Waxed Tiger Thread.
They won´t eat eachother up, and work splendidly together, The wax sealing it all up.

LinerA liner adds to the stiffnes of the sheath, and prevents the sheath from being cut or pierced from the inside or the outside.
Kydex is very suited to do this. It´s extremely stable, and will hold it´s retention forever. It won´t wear out easily.
I preferably fold it over the spine of the blade to enhance stiffness, and to reduce the bulk of the sheath. This folding of the liner also prevents the edge to be in touch with the kydex, thus blunting the blade. Basically it's a sheath on it's own.

Types of LeatherI always use halftanned or lappleather for any type of sheath. It´s much, much better suited for a functional sheath then vegetable tanned leather only. It has a core of pure rawhide, and that makes it much more difficult to cut or pierce. It´s stiffer, keeps it´s shape better and is much more resistant to weather influences.


Beltloop
The loop will match the belt as much as possible to prevent it from shifting too easy. I usually make it longer to make higher carry an option.
When slightly oversized It should be stiff enough not to fold when drawing the knife. 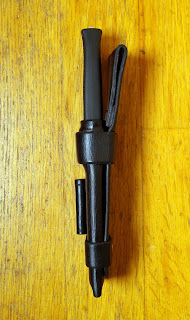 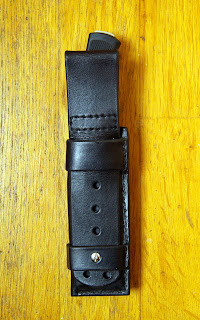 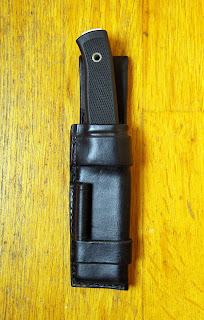 Ease of Draw
My experience learned me that I´m much more comfortable with a sheath that´s easy to draw from one handed, and that doesn´t take very much care and attention to resheath in. In order to optimize comfort as much as possible It shows a lot of handle. The beltloop is out of the way as much as possible when grabbing the handle fullhanded, and a push of the thumb releases the knife more safe and controlled then jerking alone. 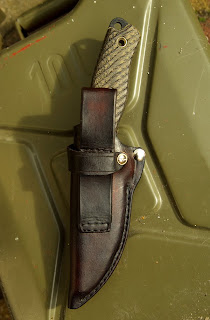 Ease of resheathing
The cup makes accidently resheating the wrong way very forgiving. You will never be able to cut the sheath beyond functionality. It takes a hard cut to damage the leather top rim of the opening.
Here you go..
scroll down to find additional info..
Feel free to ask if you want to know more..

I really like your work and wanted to price a sheath: I have a Derespina kerambit with a 2.5" blade and was wondering if you had a ballpark figure for that.

The knife has a teklok sheath, but it rides on my hip in a way that makes the handle stick out from my body. I was looking for something that would keep the handle close to my body.

If you like, you can email me at mangudai398@hotmail.com 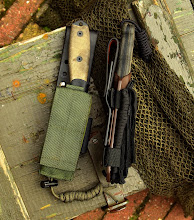 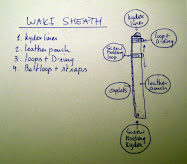 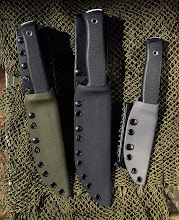 Pants for my Kraton handled Fällknivens

of a Bravo-1 sheath

a small movie of a Sheath 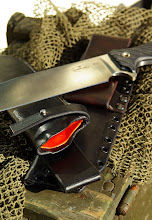 Pic of the Month

along the Scottish West Highland Way

Pic of the Month

Kit of the Month ! 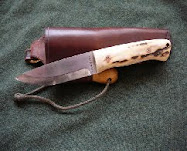